If you know the “normal” Fleshlights so far, you will be interested in the difference to the Fleshlight Flight.

Due to its smaller dimensions, the design looks more like a flashlight – but is the stimulation really the same in comparison? Is the flight sleeve even suitable for large penises?

When the Fleshlight Flight went on sale with the pilot channel, I had to test it immediately to get to the bottom of these and other questions. I was interested in the difference to the “Navigator” and “Instructor” channel. In this review I will tell you how I felt this texture. If you have any questions or comments, or even want to share your own experiences, please write me using the comment function under this test report. 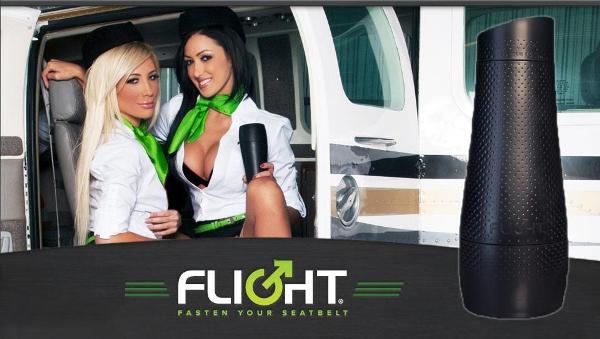 Before I start my review, I have to point out that there are two channels: The “Instructor” and the “Pilot” texture. The opening in the inner canal is shaped like a turbine, without original impressions of labia, anus or mouths. The case is elegant, stylish and yet unobtrusive. The masturbator has a total length of 20.5 centimetres, the inner channel is 15.24 centimetres long. The insert is made of milky white Superskin material (gel insert).

The case does not have the usual inner diameter of 10 centimetres, it is only between 5.5 and 8 centimetres. The compact travel model weighs just 355 grams (as opposed to 560 grams). The Fleshlight Flight Series is also known as Fleshjack.

As the channel and product names already indicate, the flight masturbators are designed for air travel. Thus, this sex toy is especially interesting for men who have to travel a lot professionally. If the case and the sleeve are also stored separately in the suitcase or hand luggage, no security officer will assume that it is a sex toy.

I even dare say that 99% of people who don’t know the Fleshlight don’t know what a “thing” it is. This is particularly practical if the wife, girlfriend, parents or children are not to learn of the secret pleasure.

The texture of the pilot fleshlight

For the travel masturbator Fleshlight Flight, the manufacturer ILF has chosen the popular Fleshlight Destroya texture, which has been slightly modified for use as a pilot channel in Fleshlight Flight. The result is very attractive and offers intensive stimulation.

The shortened Destroya channel has conical studs, a vacuum chamber followed by various stud structures. At the end of the inner canal there are stimulating grooves that guarantee a very intensive acorn massage. The expandable inner channel has an inner diameter of between 0.6 and 1.9 centimetres.

The milky-white Superskin™ material feels almost like lifelike skin. The soft and gel-like insert is made of the same material as the inserts of the regular Fleshlights, but it is not skin-coloured. The transparent, milky colouring of the insert is reminiscent of the Fleshlight ICE.

First impression with the Fleshlight Flight

After I decided to order the Fleshlight Flight, with the pilot channel, after my numerous regular Fleshlight models, I waited impatiently for delivery. The package arrived after 4 days from Spain by UPS and was, as usual, excellently packed. Each Fleshlight package is provided with two original seals, so that every buyer can immediately recognize that it is an unopened (new) original product.

The first look at my new men’s toy was very positive. The case was, as is well known, made of a hard, robust plastic. Inside the soft and velvety insert. The front, large cover of Case is secured with a bayonet lock, not screwed with a thread. The rear cover of the case, on the other hand, has a thread so that you can unscrew it more easily for cleaning, but also regulate the suction effect of the vacuum chamber with the thread. Simple technology, great effect.

The standard case of regular Fleshlights feels rather smooth, the flight case, on the other hand, is designed with rough, point-like recesses in the case rather slip-resistant. The case lies securely in the hand, even with slippery fingers (e.g. sun milk on holiday, lubricant).

As usual I put some Fleshlube (water-based lubricant) into the inner channel and heated my new Fleshlight Flight with my Sleeve Warmer. The milky transparent Superskin material feels exactly as I know and love it. The fact that the entrance was kept rather neutral did not disturb me in any way when I entered.

The shortened Fleshlight Destroya canal irritates the glans and penis shaft very intensively, especially when a strong vacuum builds up. So that these intensive stimuli did not bring me too fast to orgasm, I masturbated only slowly at the beginning.

Cleaning is the same as with conventional fleshlights. I have gotten used to rinse each Fleshlight model immediately after use thoroughly under the tap, so that also really all residues of lubricant and sperm can be eliminated.

If necessary, FleshWash or Isopropanol can be used for sustainable insert care after cleaning. This has a disinfecting effect and kills germs and fungi. I would also recommend the regular use of Renewing Powder, because the milky transparent material will feel sticky at some point.

The inner channel of the Fleshlight Flight models is narrow, but quite rigid – and can be dried well. I advise you to speed up the drying process by leaving a thin cloth (washcloth, dish towel, kitchen paper) in the canal for about six hours. After drying, leave both covers open for a few days to prevent mould. A sleeve warmer also reduces the drying time.

Conclusion of my Fleshlight Flight Review

The case is really discreet and handy. It’s not even noticeable in your luggage. If you have your masturbator once open in the hotel room, hardly a room recognizes.

For comparison: The case length of the normal Fleshlight is 25 cm and the insert length 22.5 cm, the Fleshlight Flight has only a case length of 19 cm and an insert length of 17 cm. In addition to the shorter length, the diameter is also smaller and is only 7 cm instead of 10 cm. (Overall, these proportions are very reminiscent of the Sex-in-a-Can product line and indeed the Flight Insert also fits into a Sex-in-a-Can case.

Due to its smaller size, the Fleshlight Flight is much more handy and also weighs less (355 g instead of 560 g). And that’s exactly what the Fleshlight Flight is all about, because this masturbator is primarily designed to be a discreet and unobtrusive travel companion. For this reason, not only the more compact dimensions but also the external design of the insert and case is kept as neutral as possible. If the normal Fleshlight has been too bulky for fun on the road, the Fleshlight Flight now offers a great alternative that can be easily stowed away and transported and, above all, is not unnecessarily noticeable.

The American company Interactive Life Forms, LLC. (short: I.L.F.) has developed a sophisticated range of sex toys for men. With its Fleshlight series, the company proves that it can be “different” and that masturbators for men that are suitable for orgasm are quite possible.

The latest addition to the Fleshlight family is the Flight masturbator. I.L.F. promises in advertising that the masturbator is perfect for air travel. The artpussy has a neutral opening and a discreet housing. The masturbator should not be noticed during customs or security checks with the X-ray machine. However, I.L.F. had not cut back on the penis’s emotional stability.

Whether the Fleshlight Flight Pilot really delivers what Interactive Life Forms, LLC promises, we wanted to clarify in a test and here is the test report. You will learn how the Fleshlight compares to other artificial pussies and whether it is worth buying the love toy.